The bonus: No yeast and no frying

My family loves both churros and donuts so I thought it would be fun to combine the two of them into one. The results were amazing. Just 30 minutes to warm fluffy donuts.

What is a churro donut?

A cross between a churro and a donut, these treats are packed full of delicious cinnamon. “Quick” bread donuts, means there is no yeast involved and they come together easily. Unlike traditional donuts and churros, they are baked instead of fried.

The texture of baked donuts will be more cake-like. Because there is no yeast they will be more dense, but still tender and soft. The best part is you can make these donuts at home quickly.

This easy recipe uses common ingredients from the pantry and refrigerator.

How to make Churro Donuts:

We use a donut pan from Wilton but any brand will work. Here is a link to the one I use: Wilton Donut Pans. These pans work well because they are non-stick and just the right size. Much like making a cake, you will still need to coat the pans well with butter or non-stick cooking spray in order to make sure the donuts release easily after baking.

What is the flavor of Churro Donuts?

The baked churro donut is all about the cinnamon! There is cinnamon in the batter and more cinnamon in the coating. So much cinnamon goodness! Our personal preference is Ceylon or Saignon cinnamon because it has a deeper flavor, but any cinnamon will work.

Once your donuts have cooled you will paint them in melted butter. I like to use a pastry brush to coat my donuts with butter rather than dunking them because you can ensure a light coat. You really need just enough butter to make sure the cinnamon sugar coating sticks. Like I said before – it’s all about the cinnamon!

After buttering the baked donuts you will then roll them in a shallow bowl of cinnamon sugar. Make sure you coat the whole donut!

Want to dip your churro donuts in chocolate sauce?

The answer is: Of course you do!

You can make a batch of our decadent warm 10-minute Hot Fudge Sauce or our Easy Salted Caramel Sauce to serve alongside these churro donuts and then save the leftovers for your next bowl of ice cream.

Other great desserts to try: 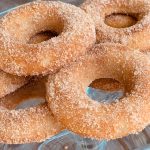